It’s been a while since I’ve done any doll stuff to post! My play time has been all BDO and D&D since my last post. Then at the end of December I hurt my neck and shoulder badly, and couldn’t grind at all. I blame the Archer. -_- His crossbow was better than his longbow, so I tried to stay in pre-Awakening most of the time. That meant lots of Shift-W and Shift-Space. Although I do use a game pad (wouldn’t be able to game without it, as my keyboard is in Dvorak layout), all that Shift was constant use of the left little finger, one of my problem fingers. Lying down made annoying waves of pain in the left triceps area, so I had to sleep on the sofa curled up on a slanted sofa pillow.

I’m feeling better and was able to grind on Valk for an hour yesterday; the first time I tried since December. But I’ll not grind on Archer, ever again!

In January one of the BDO fashions inspired me to sew again. ^ㅂ^ 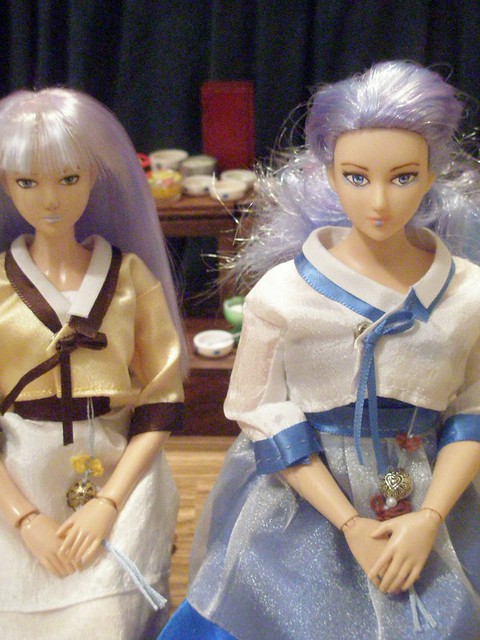 Kira has been spending a lot of time in Heidel lately, but went back to her home in Calpheon to celebrate the Lunar New Year with her little sister Tessa. They don’t have any other family in the Republic of Calpheon, so it was a small celebration with just the two of them.

Traditionally only male relatives call on the spirits of the ancestors. But an exception is made for those like Tessa, who can feel the presence of spirits and hear them speak. END_OF_DOCUMENT_TOKEN_TO_BE_REPLACED

Since I’ve recently met some new people who roleplay (RP), I was inspired to post my Black Desert Online (BDO) family in one location. ^^

My main characters were originally created in Rappelz in 2007. Since they’re already family it worked perfectly with BDO’s convention of characters on an account sharing one family name. And my family’s name, Imbrien, was available. It was fate! \o/

Though all of my BDO characters are from the backstory, not all are related. The Imbrien family originate from a Deva city west of the known world in Rappelz Epic 3. In BDO, they’re originally from the Kingdom of Haso.

The three sisters whose names are in colour are the ones I’m most likely to RP. Age means age at the beginning of the story. Relationships that developed during the story are left unmentioned here to avoid spoilers for the upcoming photostory.

So here’s Who’s Who of my BDO chars: END_OF_DOCUMENT_TOKEN_TO_BE_REPLACED

I hate rooting hair. I’ll do it, for few characters who need the exact right hair colour, but no more than absolutely necessary. Kat shared the idea to paint doll’s hair with a brush pen; so much faster and easier on my hands than rooting!

The Xinyi Boyfriend doll came with long white hair. (White in normal light. I wouldn’t have known this, but happened to go in the craft room in the dark when I couldn’t sleep, and got startled. “What is that glowing?!” Yes, his hair glows in the dark.) END_OF_DOCUMENT_TOKEN_TO_BE_REPLACED

Since I got into customizing I’ve been focused on acquiring figures, clothes, and furniture. But when I look at others’ doll photos, I enjoy seeing the little things that make the scene. So over the past year I’ve been adding to my collection some little things.

Last April(!) I posted about a plan to do some paper crafts. The plan was for lipstick cases, inspired by the What’s In Your Doll’s Bag? group on Flickr. I threw out a few in progress that weren’t going anywhere good, gave two to friends, and kept one. To make these, bend the cardboard before craft gluing the printed paper to it so the paper doesn’t crack. END_OF_DOCUMENT_TOKEN_TO_BE_REPLACED

In September I proposed a sewing challenge at Figurvore to make two similar uniforms. The purposes were to increase confidence in being able to sew more than one of an item, and to make outfits that would be useful in the stories we want to tell. I was thrilled that other members played along! ^_^

I had a specific idea of how my cleric school uniforms should look. Although Barbie school uniform patterns exist, I couldn’t find one with the right kind of collar, so decided to try my own. How hard could it be? (Spoiler: quite hard.) END_OF_DOCUMENT_TOKEN_TO_BE_REPLACED

Time has flown! Since my last post, I had the opportunity to meet another online doll friend in real life. Kat of kat’s doll world has some photostories in progress including Strike 5 which follows a League of Legends pro gaming team and Malyj Imperatorskyj Teatr about a modern theatre company in Moscow.

Kat brought Melody and Pepper to the doll meet. They travel light but well prepared.

END_OF_DOCUMENT_TOKEN_TO_BE_REPLACED 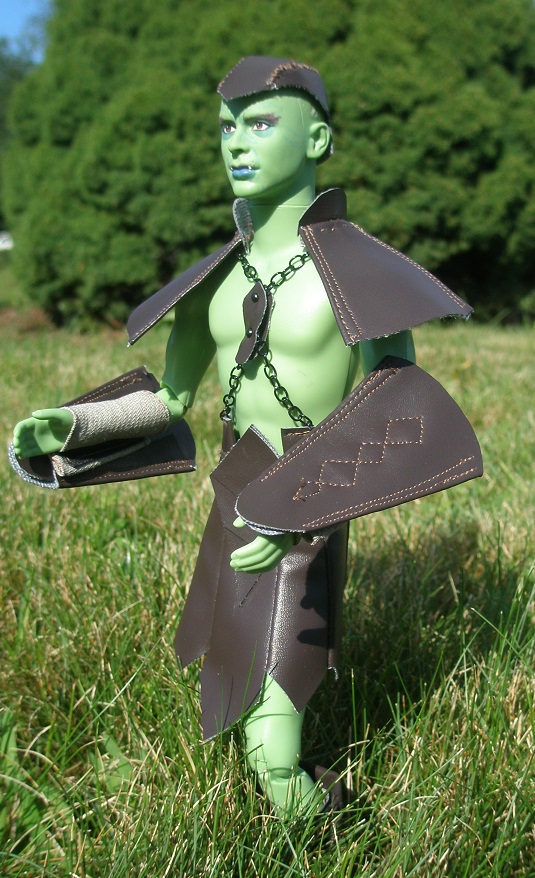 END_OF_DOCUMENT_TOKEN_TO_BE_REPLACED

Syd Blackburn wrote some of my favourite photostories: The Salonice Chronicles and Still Waters. Syd writes adventure and romance http://sbtales.weebly.com/books.html and designs book covers for other writers.

My Kira and Syd’s Syd doll did a Valentine swap a couple of years ago. Our dolls weren’t able to meet this time, but Kira, who is currently unattached, hopes to meet 1:6 Syd next time. :}

Erica/Corsetkitten is a talented doll artist whose character profiles influenced me to consider 1:6 scale when I was first looking at 1:3 or 1:4 scale BJDs to shell two MMORPG characters. END_OF_DOCUMENT_TOKEN_TO_BE_REPLACED

Before the weather gets too warm to post this…here is my first sock sweater, made (several weeks ago) from DollsAhoy’s pattern. It’s resized to 120% to fit the Integrity Toys Homme. Thanks for the idea, ModernWizard!

The collar is a bit wonky and sleeves could be taken in, but overall it’s a usable piece of menswear, often in demand.  The cable pattern was a favourite, but socks are seldom noticed, so when one got a hole I was happy to give this pair new life as a sweater. ‘ㅂ’ Another holey pair awaits conversion into a men’s sweater (apparently I like masculine socks), but all sewing (and rooting) is on hold pending recovery from a shoulder injury.

Modeling the sweater is Bartuc, one of the most formidable adventurers on the Continent. Last week he got a little more haircut. It’s closer to his style, but needs more gel and more cut (not too much!) when the hairdresser gets brave again. ^^;;

When feeling up to it I plan to start on some paper crafts; hope to post some in a few weeks.

From the Department of Redundancy Department: these are a couple of Rappelz costumes that I made before starting this website.

Kira models a Pure Suit, for Rank 2 (“R2”) Hunter. Deva Warriors can wear Hunter clothes because there is no Hunter class for the Deva race. The turquoise edges are bias tape, useful for tiny sewing.

Tessa wears a White Robe, made for a Rank 2 Cleric. The indigo fabric here is bias tape, and the fasteners are mini brads from the scrapbooking aisle.

Though R2 is low level, these are some of my favourite outfits in the game. If I like an outfit in an MMO, my character will keep a copy after having “outgrown” it in level, to wear around town.  (^^;)